Cardiovascular Health in Menopause: Move it or Lose It

One of my greatest nemeses when I was racing at 30 years of age was a woman in her 50’s. Although I hated losing to her, I was always inspired by her speed at her age. She motivated me to continue training hard, realizing my fastest days could be yet to come. As I now race in the “master’s” category in my 40’s, I still find myself crossing the line behind an older competitor occasionally. Research shows I should take heart and keep in step with females who continue to move their bodies beyond menopause. 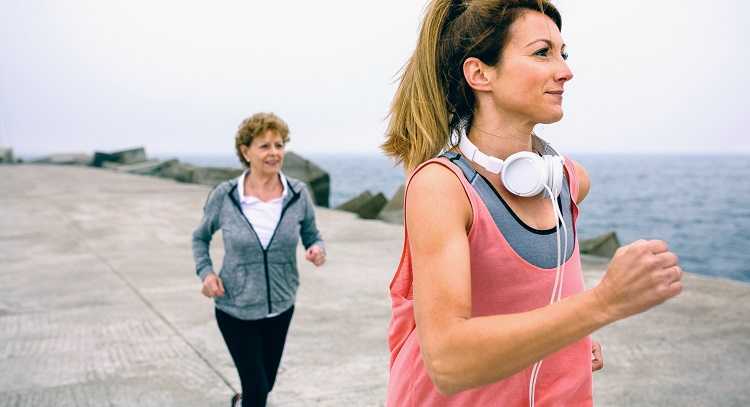 Mazurek et al., (2017) studied how organized physical activity among post-menopausal women could reduce cardiovascular risk. The study included 35 sedentary women aged 64.7 ± 7.7 years who had no serious health issues. They all participated in the Active Leisure Time Programme (ALTP) 3 times per day for 40–75 minute sessions for 2 weeks, including 39 physical activities. Exercise intensity stayed within 40–60% of maximal HR, and ratings of perceived exertion (RPE) on the Borg scale stayed between 8 and 15 points. This exercise training was followed by 3 months of the Prevent Falls in the Elderly Programme (PFEP), which is a general fitness exercise program to prevent falls in the elderly. Health status was measured at baseline, 2 weeks into the program, and after 3 months. The results showed significant reductions in central obesity, which increased the exercise and aerobic capacity of the subjects and improved lipid profiles. A significant reduction also occurred in the absolute 10-year risk of death from cardiac complications. The authors concluded these exercise programs could be effective in preventing primary and secondary cardiovascular disease in the >55 years old female population.

There are randomized controlled clinical trials and scientific evidence supporting the importance to keep moving as women (and men) age. Menopause should not be a self-proclaimed pause from activity in life. Not everyone has to become a competitive athlete to preserve cardiac and vascular integrity as we age, but we need to engage in some physical activity to keep our systems running for years to come.