Does Biofeedback Training Affect the Results of MR Defecography for Patient with Dyssynergic Defecation? 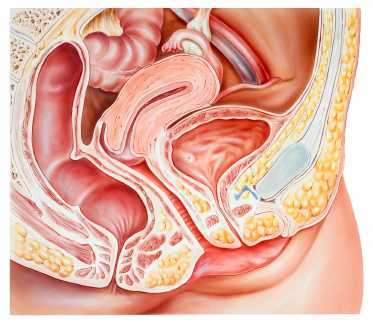 Bowel dysfunction is a common condition with potential for devastating limitation in a person's quality of life. Constipation, one type of bowel dysfunction, is often associated with an ability to properly coordinate the pelvic floor muscles during an attempt to empty the bowels. Instead of the pelvic floor muscles lengthening to allow the anorectal angle to increase (reducing the "bend" in the distal part of the rectum) the pelvic floor muscles might contract and thereby restrict proper emptying of the bowels. When this "opposite" or "paroxysmal" contraction occurs, a patient may be diagnosed with paroxysmal pelvic muscle function, also called dyssynergic defecation because of the lack of coordination in the muscles.

A recent study demonstrated that biofeedback therapy can be an effective tool in improving pelvic floor function for patients who demonstrate dyssynergic defecation. Magnetic resonance defecography (MR defecography) was measured prior to and after intervention, with variables of anorectal angle and perineal descent among those studied. Standard therapy was administered to 11 patients diagnosed with dyssynergia, and 11 patients received biofeedback therapy. All patients met the Rome diagnostic criteria for functional constipation, and all patients had diagnostic testing with resultant evidence of dyssynergistic muscle patterns. In addition to the MR defecography as a pre- and post-test, patients completed assessments of symptoms, quality of life, and severity of depression.

Standard therapy consisted of instructions in bowel habits, daily exercise such as walking, diaphragmatic breathing, fiber and fluid intake, defecation techniques, and timed toileting (such as attempting bowel movement 30 minutes after eating). Therapy occurred over a period of 3 months with at least once per week phone supervision. The patients in the biofeedback group were instructed in concepts of dyssynergia and in contract-relax training. Rectal sensory training with a rectal balloon was utilized if the patient had poor sensory perception. Patients were trained how to increase intrabdominal pressure while relaxing the pelvic floor muscles. They were also instructed in pelvic floor muscle strengthening, relaxation, and coordination, and were asked to complete home exercises three times per day for 10 minutes. Clinic sessions occurred at twice per week for 12 visits, then once per week for 6 visits, or a total of 18 visits over 3 months.

The authors found that paradoxical contraction and perineal descent with attempt to defecate improved significantly in the treatment group. Constipation symptoms, and depression and several quality of life scales also improved in the treatment group. Interestingly, the sense of incomplete emptying improved in both the treatment and the standard care group. While the results of the intervention are very positive, it would be interesting to include abdominal wall massage, a common technique employed to improve bowel function with constipation. If the patients demonstrated a tight pelvic floor with dyscoordinated patterns of movement, perhaps manual therapy to release tension or any pain that was present may have also been appropriate. As this is the first study to demonstrate through MR defecography an improvement in dyssynergia following biofeedback therapy, the study is very valuable to pelvic rehabilitation therapists. If you are interested in learning more about bowel dysfunction, you can start with the Pelvic Floor 2A course, which instructs bowel dysfunction including dyssynergistic defecation. The pelvic floor series courses sell out quickly, and the next opportunity to take this course is in St. Louis in October. You can also still find seats in the 2A continuing education course in the December courses taking place in Boston and in La Jolla.

Birth Mode, Quality of Life, and Pelvic Floor Dysf...
Nari Clemons on the Power of Meditation