An interesting study aimed to objectively answer the following question: Does applying kinesiotape to promote a posterior pelvic tilt improve an active straight leg raise (ASLR) test in women who have sacroiliac joint pain and who habitually wear high-heeled shoes? To explain some of the rationale for the chosen technique and target population, the authors first describe prior research pointing out that use of high heels can lead to an anterior pelvic tilt position and increased lumbar lordosis. This position can slacken the sacrotuberous ligament and therefore reduce the ability of the ligament to create proper form closure, according to the article. 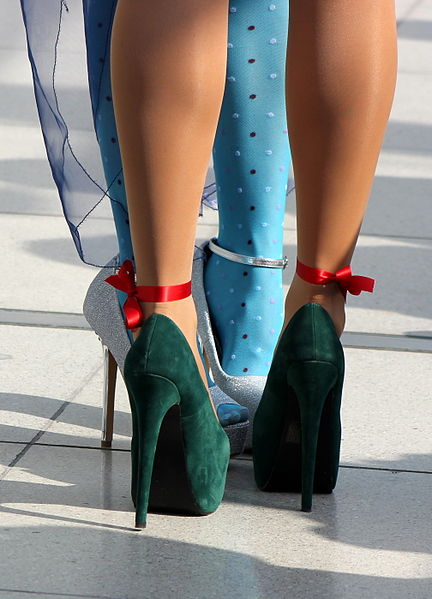 The research included 16 women with a mean age of 23.63. Inclusion criteria is as follows: having a habit of wearing high-heeled shoes (at least 4 times/week for 4 consecutive hours over at least 1 year), and having pain in both sacroiliac joints with the active straight leg raise test (ASLR). Additionally, having symptoms for at least 3 months, no proximal SIJ pain referral to the lumbar spine, and at least 3 of 5 positive SIJ tests (posterior shear test, pelvic torsion test, sacral thrust test, distraction and compression test) were needed for inclusion in the study.

Anterior pelvic tilt was measured using a palpation meter (PALM) before, immediately after application, 1 day after tape application, and immediately after removal of tape. ASLR was measured at same time points. The ASLR was self-scored on a 6-point scale ranging from “not difficult at all”” to unable to perform”. Kinesiotape was applied for a posterior pelvic tilt taping, and the tape was applied in the target position. I-type strips with ~50% of available tension were applied over the rectus abdominis and external oblique muscles. I-type strips with ~75% tension were placed from ASIS to PSIS aiming for mechanical correction of the anterior tilt.

Results of the study indicated a decrease inanterior pelvic tilt, both during and after tape application, and an improved active straight leg raise test. As this was a preliminary study, the results cannot be extrapolated to SIJ pain and dysfunction with other activities than the ASLR test. The degree of anterior pelvic tilt cannot also directly be correlated to sacroiliac joint pain and dysfunction, yet this research is very interesting, and demonstrates a simple method for affecting in the short term a patient’s mechanics as well as reports of function on the ASLR test, a very clinically simple and useful exam.

If you would like to learn more about evaluating and treating dysfunctions related to the sacroiliac joint, join Peter Philip at Sacroiliac Joint Evaluation and Treatment - New Orleans, LA this Sep 12, 2015 - Sep 13, 2015.

Tags:
Sacroiliac Joint Pelvic Tilt Peer-Reviewed Articles
What is "Mindfulness" and How Does Mindfulness Wor...
Practitioner Feature of the Week!