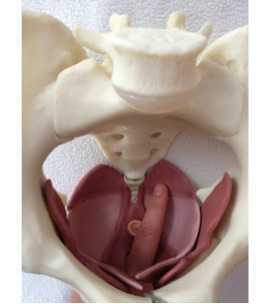 George Thiele, MD, published several articles relating to coccyx pain as early as 1930 and into the late 1960's. His work on coccyx pain and treatment remains relevant today, and all pelvic rehabilitation providers can benefit from knowledge of his publications. Thiele's massage is a particular method of massage to the posterior pelvic floor muscles including the coccygeus. Dr. Thiele, in his article on the cause and treatment of coccygodynia in 1963, states that the levator ani and coccygeus muscles are tender and spastic, while the tip of the coccyx is not usually tender in patients who complain of tailbone pain. The same article takes the reader through an amazing literature review describing interventions for coccyx pain in the early 20th century.

Examination and physical findings, according to Dr. Thiele, include slow and careful sitting with weight often shifted to one buttock, and frequent change of position. He also describes poor sitting posture, with pressure placed upon the middle buttocks, sacrum, and tailbone. Postural dysfunction as a proposed etiology is not a new theory, and in Thiele's article he states that poor sitting posture is "…the most important traumatic factor in coccygodynia…" and even referred to postural cases as having "television disease."

In reference to treatment, Thiele suggests putting a patient in Sims' position (left lateral side lying or recumbent position), and placing the gloved index finger into the rectum with the thumb over the coccyx externally, palpating the coccyx between the thumb and index finger. The finger is then moved laterally, in contact with the soft tissues of the coccygeus, levator ani, and gluteus maximus muscles. The finger is moved with moderate pressure "…laterally, anteriorly, and then medially, describing an arc of 180 degrees until the finger tip lies just posterior to the symphysis pubis." The massaging strokes, applied to a patient's tolerance, are applied 10-15 repetitions on each side with the patient being asked to bear down during the massage strokes. Dr. Thiele recommended daily massage 5-6 days, then every other day for 7-10 days, and gradually less often until symptoms are resolved.

Thiele's massage for coccygodynia is one excellent tool in the treatment of coccyx pain. For a comprehensive view of coccyx pain, check out faculty member Lila Abatte's Coccyx Pain Evaluation and Treatment continuing education course, coming up in New Hampshire in September!

Why 1x/week?
PTSD in the Postpartum Period