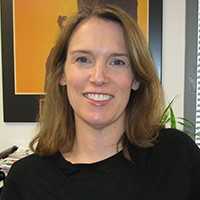 Cathy was raised in Paso Robles, California and attended Occidental College (Los Angeles) where she earned her bachelor’s degree (psychobiology with a minor in exercise science) in 1991. She also excelled in intercollegiate volleyball and track and field, specializing in the heptathlon. Following graduation, Cathy elected to pursue a career in physical therapy and enrolled at Mount St. Mary’s College, which sponsored a graduate program emphasizing the relationship between patient and therapist. During her final year of study, Cathy interned at TAI and found the work environment, job description and co-workers to her liking. She joined TAI in 1996 at Providence St. Joseph’s Medical Center. Cathy split her time between the Inpatient Department, Acute Rehab and the Continence Restoration Center. In 2003 she moved to the Outpatient Department where she works on a full-time basis. Subsequently, Cathy has developed her orthopedic skills while earning certification as a Sports Physical Therapy Specialist (2007). She recently passed the inaugural certification in pelvic floor rehab through the Herman & Wallace Institute for Pelvic Rehabilitation. Cathy has been recognized for her excellent service to the company and the hospital over the years. She is a recipient of the annual James B. McKillip Award and the Mission Spirit Award from PSJMC. In 2011, she was voted “Best Physical Therapist” by the Burbank Leader. Away from work, Cathy enjoys spending time with her husband James and daughters, Patty and Lizzy. Cathy still plays in recreational volleyball leagues, but mostly cheers for her kids from the sidelines. In addition, Cathy is active in her daughter’s elementary school foundation and her church.