Honestly, I have never noticed Curcumin on any of my patients’ lists of pharmaceuticals or supplements, but I will be certain to look for it now. Curcumin is the fat-soluble molecule that gives turmeric its yellow pigment, and it is best absorbed with the addition of black pepper extract. Patients often complain non-steroidal anti-inflammatory medicines (NSAIDs) tear apart their stomachs, so newer studies showing positive results with the use of an herb sound promising, even for pelvic health. 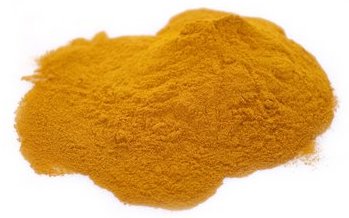 A 2015 study by Kim et al. researched the inhibitory effect of curcumin on benign prostatic hyperplasia induced by testosterone in a rat model. Benign prostatic hyperplasia (BPH) is common among men and has a negative impact on the urinary tract of older males. Steroid 5-alpha reductase converts testosterone into dihydrotestosterone (DHT), and this increases as men age and may have negative effects on the prostate gland. Because of the side effects of conventional drugs (like finasteride) to inhibit steroid 5-alpha reductase, the authors wanted to determine if curcumin could play a protective role in BPH. They divided 8 rats into 4 groups after removal of testicles: 1) normal, 2) BPH testosterone induced subcutaneously, 3) daily curcumin (50mg/kg orally), and 4) daily finasteride (1mg/kg orally). The group receiving curcumin had significantly lower prostate weight and volume than the testosterone induced BPH group, and curcumin decreased the expression of growth factors in prostate tissue. The authors conclude curcumin may be a useful herb in inhibiting the development of BPH with fewer side effects than conventional drugs.

In the urology realm, Cosentino et al.2016 explored the anti-inflammatory effects of a product called Killox®, a supplement with curcumin, resveratrol, N-acetylcysteine (NAC) and zinc. When benign prostatic hyperplasia (BPH) is not treated with drugs, a surgical intervention can be executed called a transurethral resection of the prostate (TURP); or, for bladder cancers, a transurethral resection of the bladder (TURB) can be performed. Either surgery generally requires administration of NSAIDs post-operatively for inflammation, urinary burning, or bladder spasms or to prevent later complications such as urethral stricture or sclerosis of the bladder neck. This open controlled trial involved Killox® tablet administration to 40 TURP patients twice a day for 20 days, to 10 TURB patients twice a day for 10 days and to 30 BPH patients who were not suited for surgical intervention once a day for 60 days. The control group received nothing for 1 week post-surgery, and 52.5% of TURP and 40% of TURB patients required NSAIDs to treat burning and inflammation the following 7 days. None of the Killox® treatment groups had post-operative or late complications except one, and none suffered epigastric pain like those using NSAIDs. The authors concluded Killox® had significant positive anti-inflammatory and analgesic effects on the patients and could be used as a safe alternative to NSAIDs by physicians.

Although “just” an herb, the use of curcumin should be supervised by a healthcare professional who understands proper dosage and any possible contraindications for a particular individual. The curcumin needs to be in a form that can be easily digested and used effectively by the body. Ultimately, it is exciting to learn about an alternative to gut-wrenching NSAIDs, making curcumin a noteworthy anti-inflammatory option for patients.

Nutrition plays an important part in patient wellness and rehabilitation. There are many reasons to consider diet when designing treatment regimens and you can learn all about them in Megan Pribyl's Nutrition Perspectives for the Pelvic Rehab Therapist course. Your next chance to take this course is March 31 - April 1, 2017 in White Plains, NY. Don't miss out!