The following is part three in a series documenting Deb Gulbrandson, PT, DPT's journey treating a 72 year old patient who has been living with multiple sclerosis (MS) since age 18. Catch up with Part One and Part Two of the patient case study on the Pelvic Rehab Report. Dr. Gulbrandson is a certified Osteoporosis Exercise Specialist and instructor of the Meeks Method, and she helps teach The Meeks Method for Osteoporosis course. 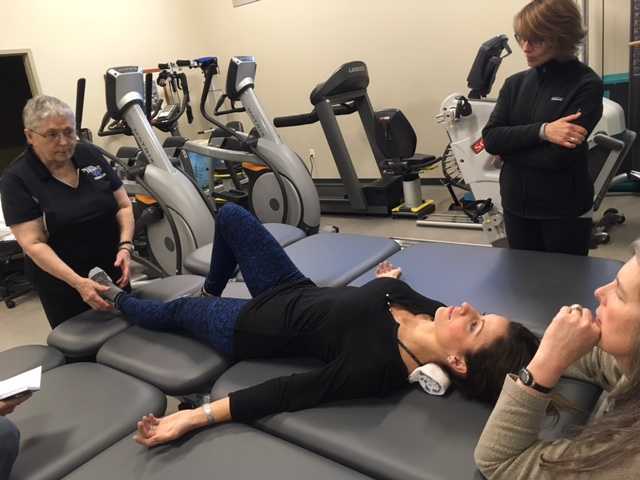 On Maryanne’s third visit, after reviewing her home exercises I told her that today our focus was on alignment. “In dealing with osteoporosis we want the forces that act upon our bodies to line up as optimally as possible. We have gravity providing a downward force from above and we have ground reaction forces coming up from below. Remember back to your first visit when we did the Foot Press in sitting and talked about Newton’s 3rd Law? For every action there’s an opposite and equal reaction and, how by pressing your feet down it helped you to sit straighter and gave more support to your back?” She nodded in agreement.

“Well, there’s another important component to that- one that we call optimal alignment. When we sit or stand in a flexed posture, those two opposing forces do not line up well and can put undue stress and pressure on our body, particularly the vertebral bodies.” I showed her the spine again with an increased flexion (hyper-kyphosis) in the thoracic area. “It’s normal to have a kyphosis in the thoracic spine. What we don’t want is a hyper-kyphosis. We often see the apex of the increased curve around T-7, 8, 9 levels near the bra line. We also call it the “slouch line” because from the front, that’s where we slouch in sitting. A thoracic hyper-kyphosis can lead to hyper-lordosis in the lumbar spine as the body tries to counteract the flexion forces above with extension or arching in the low back. We know that Wolff’s Law states that bone in a healthy person will adapt to the loads under which it is placed.1 But we want those loads to be optimally transmitted; otherwise the adaptation can be problematic.”

With Maryanne sitting in a Perch Posture position on the side of the low mat table, I placed a 4 foot dowel rod alongside her back, touching her sacrum and apex of her thoracic curve. I instructed her to bring her occiput back toward the dowel without extending her neck. I wanted her to do more of a cervical retraction move. She was a good 3+ inches away. Previously I had measured her using the WOD (Wall to Occiput Distance).2 This helps patients understand when they are forward flexed in the upper thoracic and cervical area and becomes an exercise as well. Since Maryanne was not safe in a standing position, we used an armless chair against the wall. I turned it sideways so the side of the chair was snugged up to the wall and transferred her to the chair, sitting so that her sacrum was flush against the wall. “Bring your upper back against the wall without allowing your low back to arch forward”, I told her as I placed a folded towel behind her head. “Now you’re going to press the back of your head into the towel, just as you do when lying down in the Re-alignment routine. Before you perform the Head Press, inhale to prepare, start your exhale, then do the head press. Hold for 3 -5 seconds as you continue to exhale, then relax as you inhale. Do 3-5 reps.”

The Head Press in standing, (or in Maryanne’s case, sitting) is a convenient way to not only strengthen the back muscles isometrically, but also increase awareness of body in space and relationship of head to trunk positioning. For any individual who has developed a forward head position over a period of years, there is a loss of the proprioceptive feedback necessary to know when we’re not in alignment, even if we have the ROM to achieve it. And often a lack of strength and especially muscle endurance to maintain that optimally aligned position is problematic. Using the wall several times a day can assist in building strength and awareness. In Maryanne’s case we needed a folded towel behind her occiput to give her something to press into and prevented her from going into increased cervical extension.

“I still want you to do the Head Press in supine as part of the Re-alignment routine everyday”, I told her. “But also practice it in sitting against a wall, making sure your sacrum is right up against it. Do this several times a day for several minutes, holding 3-5 seconds each. And be sure to use your breath to maintain neutral alignment of your lumbar spine.”
And with that, our work for the day was done.