The following comes from a male patient who wanted to share his story about finding care for his pelvic floor dysfunction. His story highlights the important role pelvic rehab practitioners can play, and why we need to continue training more therapists in this field.

I’m 65 year old male and I developed pudendal neuralgia and pelvic floor issues as a result of an accident about four years ago. Shortly after my accident I started to experience pain in my testicles and perineum.  At the time, I did not think that one had anything to do with the other. I made an appointment with my urologist who did an ultrasound and assured me that there was nothing physically wrong. I don’t think my testicles quite believe that but mentally I felt relieved. But the pain persisted and started to spread. Now it was also in my groin and penis.  I was also having problems with chronic constipation, urinary retention and erectile dysfunction. Since I did have back surgery years ago I started to suspect my low back was causing the problem. I made an appointment with a well-respected orthopedic surgeon in New York. While he gave me his analysis with regards to my back problems he clearly avoided addressing the pelvic issues. I left there feeling lost. Suffice it to say that over the course of the next couple of years I saw several other specialists who either skirted around the issue or told me that nothing was wrong. A couple of years passed but the pelvic issues just continued to get worse and worse. I started seeing a new primary care physician who indicated that perhaps the source of the pelvic pain was coming from the pudendal nerve and felt that physical therapy might help. She gave me a prescription for physical therapy to evaluate for pudendal nerve. 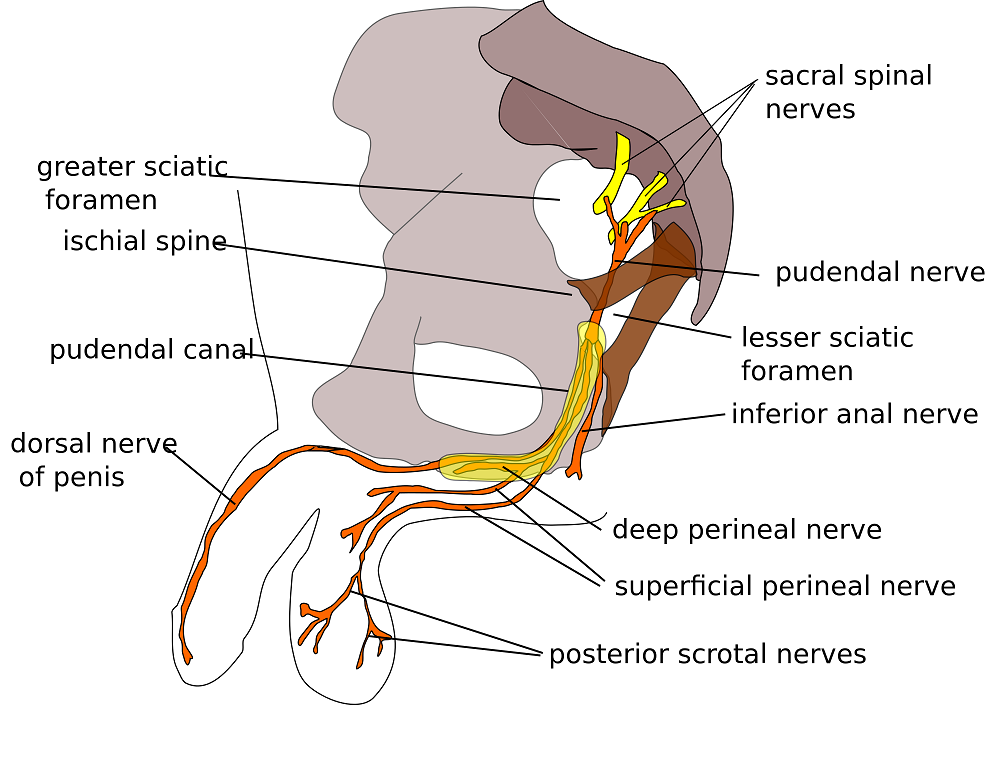 Well, I have a diagnosis now so I start researching pudendal neuralgia and land on the Pudendal Hope website. Wow! What an eye opener that was.  I’m reading the information on the website and it was like I had an epiphany.  I realized that I was not going crazy and that Pudendal Neuralgia and pelvic pain are very real issues.

There are days when I am in so much pain that I ask myself if the pelvic therapy is really doing me any good. But then I reflect back to how things were before I started the therapy. Funny thing about pain… often times it makes us forget how things were in the past and shift our focus to the here and now. That being said, I quickly realize how much I have truly progressed since starting therapy.

So what have I learned?  Well, the first thing is to understand the anatomy and how all the pelvic muscle groups and nerves are integrated. After all you can’t fix what you don’t know is broken. Therapy has certainly helped educate me in that respect; I’ve learned the importance of proper breathing and strengthen the core muscles.  I know that when I was in pain I would tighten up the pelvic muscles and hold my breath which would only make things worse, as the muscles would get into a knot, and make it even more difficult to get relief.  I’ve learned a whole new set of exercises that I now have in my arsenal to help fight this battle. To help me deal with the chronic constipation I’ve learned how to massage my abdomen to help move things along. For those folks dealing with chronic constipation, well, we all know what happens when we push just a little too hard… flare time! I could go on and on. I learned to use tools, such as the TheraWand, to help break the tension for those internal pelvic muscles. Pelvic therapy has taught me the importance and benefits of the proper use of cold packs, glides, exercise, breathing, relaxing the pelvic floor and on and on and on.

I was a bit embarrassed getting started but the prospect of relieving some of the pelvic pain and the professionalism of my therapist quickly turned my embarrassment into a non-issue.

I want to express my thanks and gratitude to all those physical therapists who have the courage and vision to take on this problem. You are truly making a difference in the lives of the people you are helping.