The Center for Disease Control reports that prostate cancer is the most common form of male cancer in the United States (just ahead of lung cancer and colorectal cancer), and the American Cancer Society estimates that 1 in 7 men will be diagnosed with prostate cancer at some point in their lifetime. With prostate cancer being so common, it is likely that a male with symptoms of urinary incontinence following a prostatectomy may show up at your clinic’s door for treatment. What do you do? Whether you have extensive training for male pelvic floor disorders or are just starting your initial training for pelvic floor dysfunctions, you likely have some intervention skills to help this population. 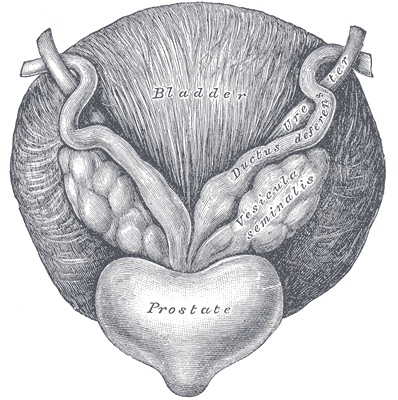 A recent case report in the Journal of Women’s Health Physical Therapy, outlines management of a 76-year-old male patient with mixed urinary incontinence postprostatectomy 10 years. This case report does a nice job describing not just physical therapy (PT) interventions, but also multifaceted management of a typical patient post radical prostatectomy. The case report describes a thorough history, systems review, pelvic floor muscle (PFM) examination, tests &measures, and outcome assessment. Our discussion will focus on interventions as you may already possess the skills for several of the treatments included in this patient’s plan of care.

The patient’s complaints were mixed urinary incontinence (UI) symptoms including 3-4 pads per day and 1 pad at night. He reported nocturia 3-4 times per night. 2-3 times per week he had large UI episodes that soaked his outwear. Also, he complained of inability to delay voiding, and UI with walking to the bathroom, sit to stand, lifting, coughing, and sneezing.

For the patients’ urge UI symptoms, behavioral interventions were utilized. The patient completed PFM contractions to inhibit detrusor contractions and suppress urgency (urge control technique). Educating the patient on correct PFM contraction isolation was a very important component of this patients’ treatment. Verbal, digital, and surface electromyography (sEMG) techniques were used to ensure correct PFM contraction and to reduce Valsalva. Clinical decision making for home exercise program utilized dominant PFM fiber types and the patients’ performance on the PERFECT PFM strength testing system described by Laycock. (External Urethral Sphincter is predominantly Type II fast twitch muscle fiber in males and Levator Ani is predominantly Type I slow twitch.) For the home program, the patient completed progressive reps and sets of 10” (targets slow twitch) and 2” (targets fast twitch) PFM isometrics in supine progressing to standing. (There is a chart with additional details on PFM home program for each visit in the case report.) Additionally, instruct and use of “the knack” (volitional PFM contraction before and during cough or other physical exertions to prevent UI) for activities that the patient usually had UI with including sit to stand transfer, lifting, coughing, and sneezing was essential for the patients’ symptoms. PFM coordination training with sEMG helped reduce his accessory muscle recruitment patterns and Valsalva. Bladder retraining and lifestyle recommendation were important (per his 3-day bladder diary) as he was consuming 3 cups of coffee and 4 cups or more of tea a day, likely contributing to urgency and urge UI symptoms. Also, he was informed regarding the effect of obesity on UI (as his BMI was 35.9 placing him in the obese range) and that modest amounts of weight loss maybe sufficient for UI reduction. Abdominal exercises targeting Transversus Abdominus were also prescribed for their role in core support with PFM’s. Lastly, electrical stimulation was not included in this patients’ plan of care due to the patients’ cardiac history and pacemaker, as well as, he could initiate PFM contraction and utilize urge control techniques appropriately.

The outcome for this patient was positive. He attended 5 PT sessions over a 3-month period. He did have to cancel two appointments between the 4th and 5th visits due to an emergency surgery to place two cardiac stents. He had reduced urinary leakage indicated by reduced undergarment changes and reduced pad usage per day. His pads were less saturated and he no longer had leakage that spread to his outwear. He had a 50% reduction in UI episodes reported on his bladder diary and a 50% reduction in nocturia from 4 times to 2 times per night. He reported reduced daily urinary frequency from 7 to 5 times per day with no instances of severe urgency. He demonstrated improved PERFECT score of 4, 10, 8, 10 (initially his score was 2, 5, 3, 5) indicating improved PFM strength and endurance. Also, he had improved PFM coordination as he could isolate PFM contraction without Valsalva or accessory muscle activation. He also had one strength grade improvement with abdominal strength. All that being said, most importantly, this patient had improved rating on the outcome questionnaire (International Continence Society male Short Form (ICSmaleSF)) at discharge indicating improved quality of life. At initial evaluation, this patient rated “a lot” (3 on ICSmaleSF) when asked how much the urinary symptoms interfered with his life, at discharge he reported “not at all” (0 on ICSmaleSF).

One component to this case that I found fascinating was the duration of time that had passed since this patients’ prostatectomy. It had been 10 years since this patient had his surgical procedures. He had never been offered physical therapy or knew about it as a possible treatment for his symptoms. Additionally, that he could have such success with improvements in voiding and incontinence function, as well as improved quality of life as long as 10 years’ post-prostatectomy.

This case report is a comprehensive glimpse of what physical therapy assessment and treatment may look like for a patient with urinary dysfunction following radical prostatectomy. This patient had great improvements with positive changes enhancing his quality of life. So, if you are considering adding treatment of this population to your practice consider attending Post-Prostatectomy Patient Rehabilitation, available this July in Annapolis, MD or September in Seattle, WA.