Testicle and penis pain or numbness after hernia repair

Most people are told that inguinal hernia repair is a low risk surgery. While death or severe injury is rare, penile or testes pain after hernia repair is not a novel or recent finding. In 1943, Magee first discussed patients having genitofemoral neuralgia after appendix surgery. By 1945, both Magee and Lyons stated that surgical neurolysis gave relief of genital pain following surgical injury (neurolysis is a surgical cutting of the nerve to stop all function). However, it should be noted that with neurolysis, sensory loss will also occur, which is an undesired symptom for sexual function and pleasure. In 1978 Sunderland stated genitofemoral neuralgia was a well-documented chronic condition after inguinal hernia repair. 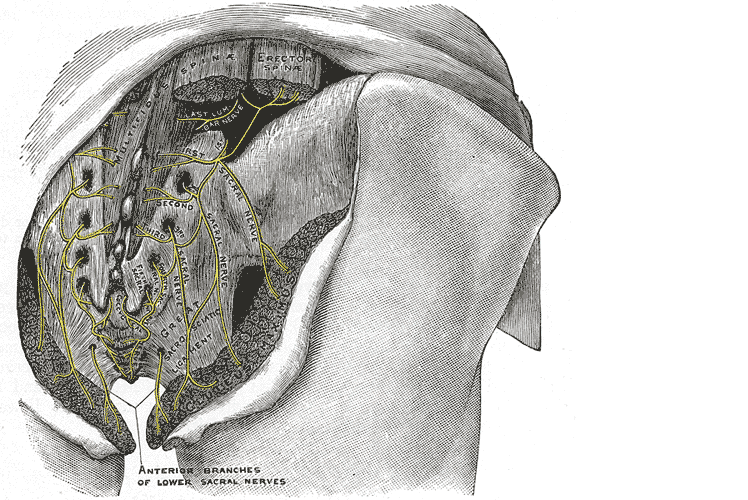 Let’s do a quick anatomy review. The inguinal canal is located at the lower abdomen and is actually an extension of the external oblique muscles. Is travels along the line from the ASIS to the pubic tubercle, occupying grossly the medial third of this segment. It has a lateral ring where contents from the abdomen exit and a medial ring where the contents of the canal exit superficially. This ring contains the spermatic cord (male), round ligament (female), as well as the ilioinguinal and genitofemoral nerves. For males, in early life, the testes descend from the abdominal cavity to the exterior scrotal sac through the inguinal canal, bringing a layer of the obliques, transverse abdominus, and transversalis fascia with them within the first year of life. Just as a female can experience prolapse from prolonged increased intra-abdominal pressure, a male can have a herniation through the anterior abdominal wall and inguinal canal with increased abdominal pressure. Such pressure inducing activities can be lifting, coughing, and sports activities. When this occurs, an inguinal hernia repair is generally indicated. Because the genitofemoral nerve is within the contents of the inguinal canal, it can be susceptible to surgery in this area. The genitofemoral nerve has sensory innervation to the penis and testes and is responsible for the cremasteric reflex. Symptoms of genitofemoral neuralgia in men can be penis or testes pain, numbness, hypersensitivity, and decreased sexual satisfaction or function.

In 1999 Stark et al noted pain reports as high as 63% post hernia repair. The highest rates of genitofemoral neuralgia are reported with laparoscopic or open hernia repair (Pencina, 2001). The mechanism for GF neural entrapment is entrapment within scar or fibrous adhesions and parasthesia along the genitofemoral nerve (Harms 1984, Starling and Harms 1989, Murovic 2005, and Ducic 2008). It is well known that scar and adhesion densify and visceral adhesions increase for years after surgery. Thus, symptoms can increase long after the surgery or may take years to develop. In 2006, Brara postulated that mesh in the region can contribute to subsequent genitofemoral nerve tethering which can be exacerbated by mesh in the inguinal or the retroperitoneal space. With an anterior mesh placement, there is no fascial protection left for the genitofemoral nerve.

Genitofemoral neuralgia is predominately reported as a result of iatrogenic nerve damage during surgery or trauma to the inguinal and femoral regions (Murovic et al, 2005). However, genitofemoral neuropathy can be difficulty and elusive to diagnose due to overlap with other inguinal nerves (Harms, 1984 and Chen 2011).

In my clinical experience, I have seen such symptoms after hernia repair, but also after procedures near the inguinal region such as femoral catheters for heart procedures, appendectomies, and occasionally after vasectomy.

As a pelvic PT, what are we to do with this information? First off, we can realize that all pelvic neuropathy is not necessarily due to the pudendal nerve. In the anterior pelvis, there is dual innervation from the inguinal nerves off the lumbar plexus as well as the dorsal branch of the pudendal nerve. When patients have a history of inguinal hernia repair, we can consider the genitofemoral nerve as a source of pain. Medicinally, the only research validated options for treatment are meds such as Lyrica or Gabapentin that come with drowsiness, dizziness and a score of side effects. Surgically neurectomy or neural ablation are options with numbness resulting, however, many patients do not want repeated surgery or numbness of the genitals. As pelvic therapists, we can manually fascially clear the path of the nerve from L1/L2, through the psoas, into and out of the canal and into the genitals. We can also manually directly mobilize the nerve at key points of contact as well as doing pain free sliders and gliders and then give the patient a home program to maintain mobility. Pelvic manual therapy can offer a low risk, side-effect free option to ameliorate the sequella of inguinal hernia repair. Come join us at Lumbar Nerve Manual Assessment and Treatment in Chicago this Spring to learn how to effectively treat all the nerves of the lumbar plexus.