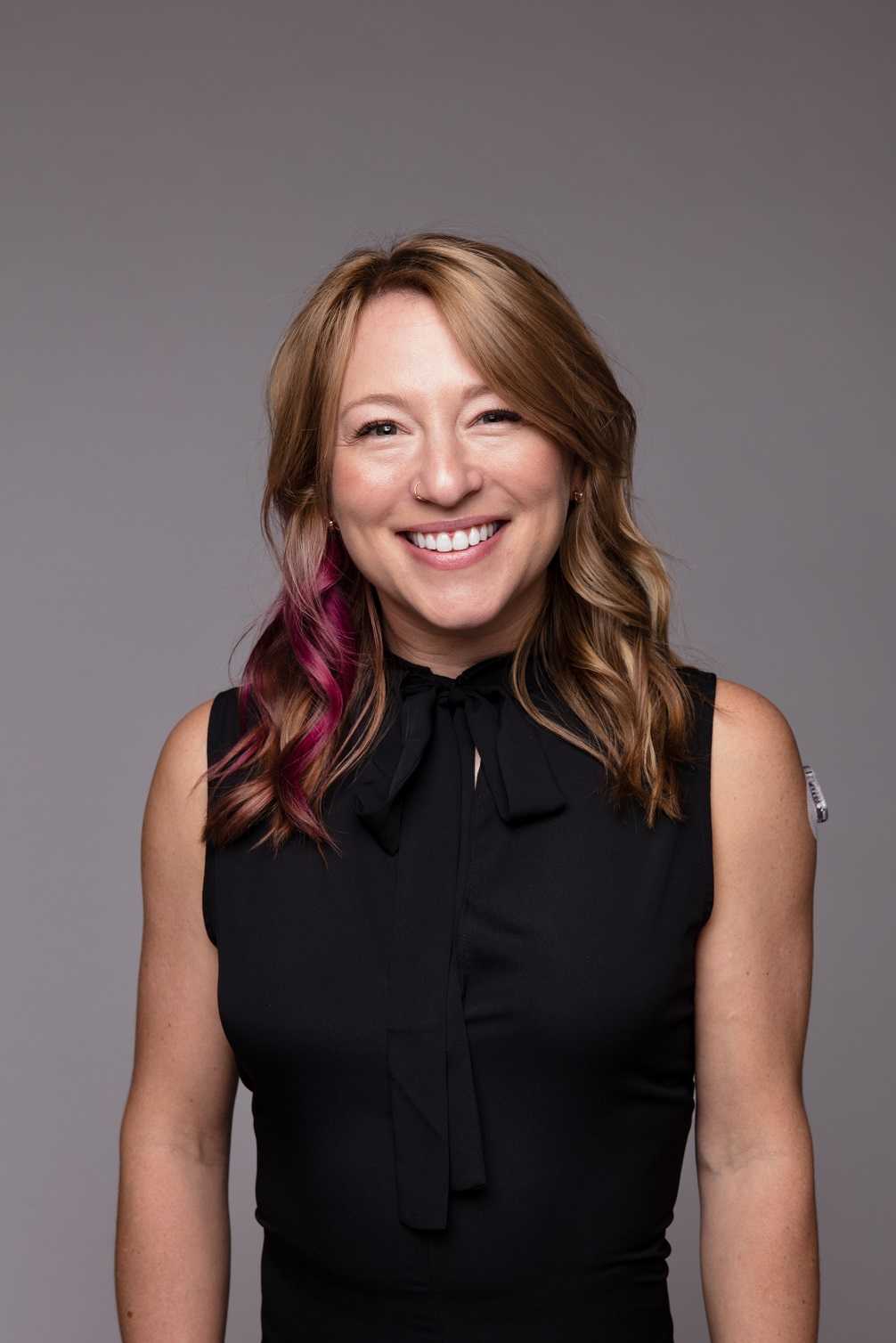 Mia Fine, MS, LMFT, CST joins the Herman & Wallace faculty in 2020 with her new course on Sexual Interviewing for Pelvic Health Therapists! The new course is launching this April 4-5, 2020 in Seattle, WA; Lecture topics include bio-psycho-social-spiritual interviewing skills, maintaining a patient-centered approach to taking a sexual history, and awareness of potential provider biases that could compromise treatment. Labs will take the form of experiential practice with Bio-Psycho-Social-Spiritual-Sexual Interviewing Skills, case studies and role playing. Check out Mia's interview with The Pelvic Rehab Report, then join her for Sexual Interviewing for Pelvic Health Therapists!

What can you tell us about the new course?
This course will offer a great deal of current and empirically-founded sex therapy and sex education resources for both the provider as well as the patient. This course will add the extensive skills of interviewing for sexual health. It also offers the provider a new awareness and self-knowledge on his/her/their own blind spots and biases.

How will skills learned at this course allow practitioners to see patients differently?
Human beings are hardwired for connection, intimacy, and pleasure. Our society often tells us that there is something wrong with us, or that we are defective, for wanting a healthy sex life and for addressing our human needs/sexual desires. This course will broaden the provider’s scope of competence in working with patients who experience forms of sexual dysfunction and who hope to live their full sexual lives.

What inspired you to create this course?
This course was inspired by the need for providers who work with pelvic floor concerns to be trained in addressing and discussing sexual health with their patients.

What resources were essential in creating your course?
Becoming a Licensed Marriage and Family Therapist and a Certified Medical Family Therapist requires three years of intensive graduate school. Additionally, a minimum of two years of training to become an AASECT Certified Sex Therapist and hundreds of hours of direct client contact hours, supervision, and consultation. I attend numerous sex therapy trainings and continuing education opportunities on a regular and ongoing basis. I also train incoming sex therapists on current modalities and working with vulnerable client populations.

How do you think these skills will benefit a clinician in their practice?
It is vital that providers working with pelvic floor concerns have the necessary education and training to work with patients on issues of sexual dysfunction. It is also important that providers be aware of their own biases and be introduced to the various sexual health resources available to providers and patients.

What is one important technique taught in your course that everybody should learn?
Role playing sexual health interview questions is an important experience in feeling the discomfort that many providers feel when asking sexual health questions. This offers insight not only into the provider experience but also the patient’s experience of uncomfortability. Role playing this dynamic illustrates the very real experiences that show up in the therapeutic context.

Sexuality is core to most human beings’ identity and daily experiences. When there are concerns relating to our sexual identity, sexual health, and capacity to access our full potential, it affects our quality of life as well as our holistic well-being. Working with folks on issues of sexual health and decreasing sexual dysfunction encourages awareness and encourages healing. Imagining a world where human beings don’t walk around holding shame or traumatic pain is imaging a world of health and happiness. 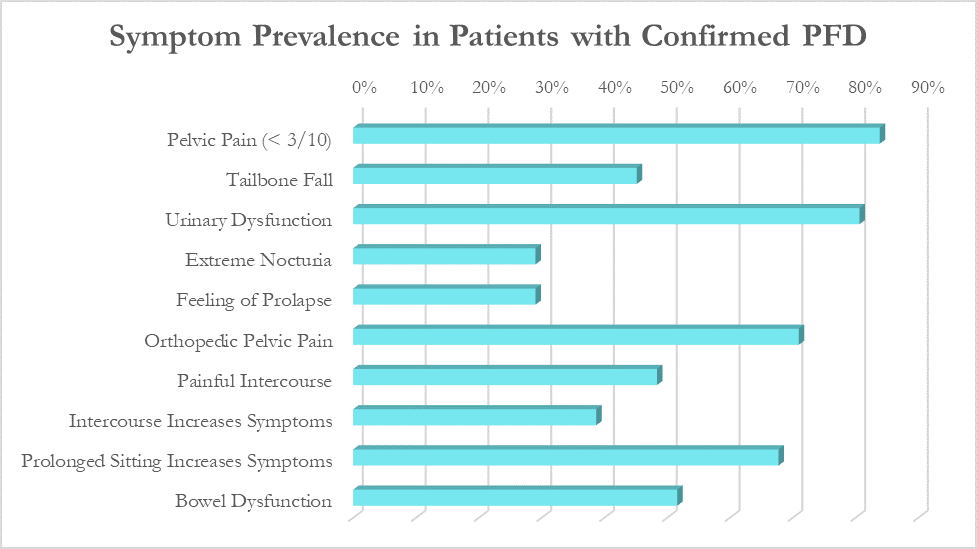 Earlier diagnosis is clearly a huge need for patients with pelvic floor dysfunction. Many patients suffer with their symptoms for years before even hearing the words “pelvic floor,” or realizing that a pelvic floor physical therapist may be able to help. For interstitial cystitis, one large survey article found fewer than 10% of patients with the condition had been correctly diagnosed with IC, even after years of symptoms and visits with multiple doctors.

Even after being diagnosed, patients still don’t learn about how the pelvic floor can be causing or exacerbating their symptoms. In one study of our interstitial cystitis patients, 46% learned about the importance of the pelvic floor on their own and sought out treatment independently, while nearly half felt they were referred by their physician to physical therapy far too late, as a ‘last resort.’ This is despite the fact that many of these patients had seen five or more physicians and physical therapy is considered the most proven treatment for IC by the American Urological Association.

While these patients all had different medical diagnoses, many symptoms were common across the patient population. The most common were pelvic pain (84%), urinary urgency, frequency, or incontinence (81%), orthopedic pelvic pain (71%) and symptoms that worsen with prolonged sitting (68%). 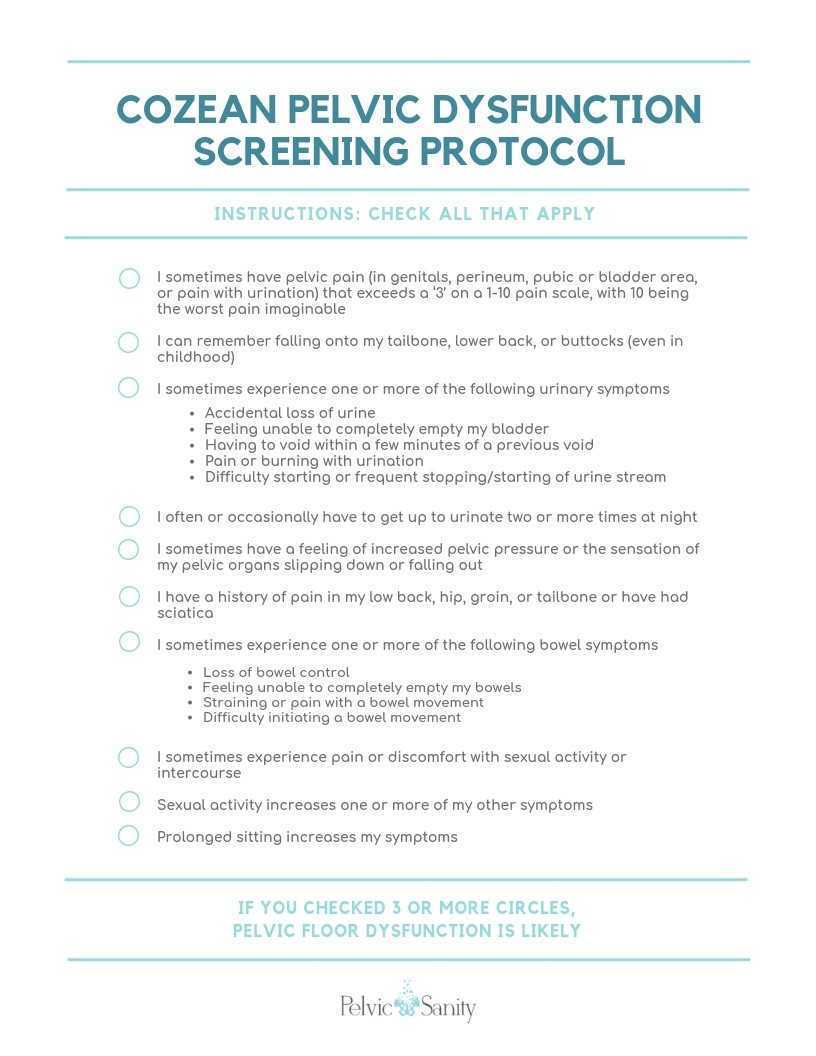 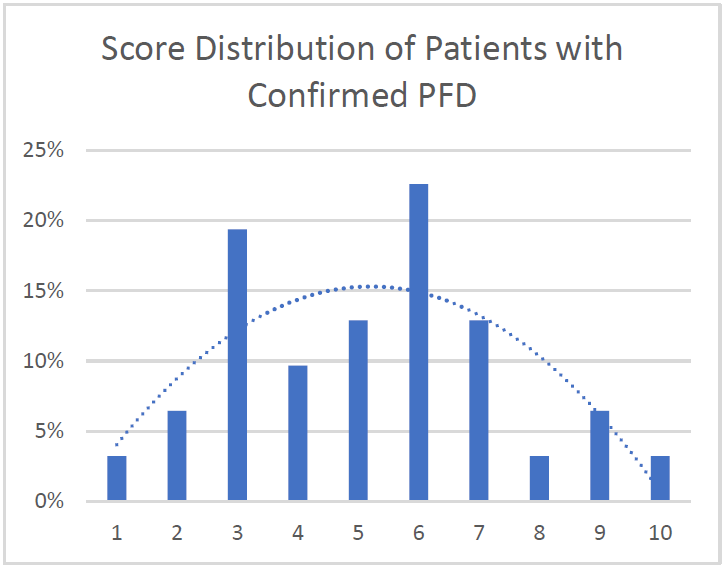 Specificity: 91%. More than 90% of patients with confirmed pelvic floor dysfunction were correctly identified by this screening protocol. Additional testing is required on a general population without PFD to determine the specificity of the questionnaire.

Average: 5.2. Of patients with confirmed PFD, the average score according to this screening protocol was 5.2 with a median score of 5 and a mode of 6. This is in line with what would be expected with a normal distribution curve.

We hope this 10-question survey is able to help patients with pelvic floor dysfunction be diagnosed earlier - whether by their physician, other physical therapists, or themselves – and seek pelvic floor physical therapy earlier in their medical journey. Please feel free to use the printable version of this protocol with your patients or in working with local practitioners.

Nicole Cozean will be teaching the course Interstitial Cystitis: Holistic Evaluation and Treatment in Princeton, NJ from April 6-7, 2019. 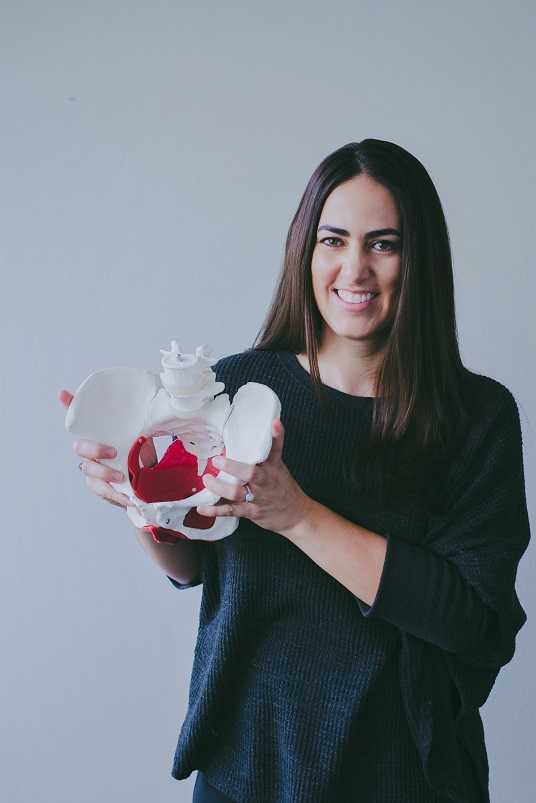 Nicole Cozean is the founder of PelvicSanity physical therapy, in Orange County, California. Nicole was named the 2017 PT of the Year, is the first physical therapist to serve on the ICA Board of Directors, and is the award-winning and best-selling book The Interstitial Cystitis Solution (2016). She is an adjunct professor at her alma mater, Chapman University and teaches continuing education courses through the prestigious Herman & Wallace Institute.